Livingston Lord Library, like many academic libraries in the United States, uses the Library of Congress Classification for call numbers. This system uses a combination of letters and numbers to arrange materials by subjects. 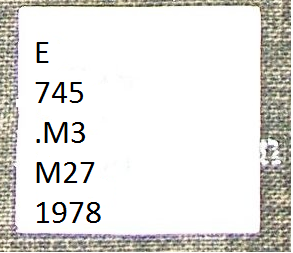 Read the second line as a whole number:

The third line is a combination of a letter and numbers.

(Some call number have more than one combination letter-number line.)

This is the year the book was published.