Origins of the day

On September 17, 1787, the Founding Fathers signed the U.S. Constitution. For the past 230 years, the Constitution has served as the supreme law of the land. The Constitution, along with the Bill of Rights and other amendments, define our government and guarantee our rights.

Each year, on September 17, Americans celebrate Constitution Day and Citizenship Day. In addition, September 17-23 is also recognized as Constitution Week. During this time, the United States Customs and Immigration Service (USCIS) encourages Americans to reflect on the rights and responsibilities of citizenship and what it means to be a U.S. citizen.

We also recognize people who are taking steps to become U.S. citizens. To help them prepare, USCIS offers study resources for the civics and English portions of the naturalization interview and test. The Constitution and the rights and responsibilities of citizenship are important in the United States and prospective citizens may see these items in several places on the naturalization test. There are many questions on the civics test on these two topics, such as, “What is the supreme law of the land?” and “What are two rights of everyone living in the United States?”.

(see amendments and revisions to the act) 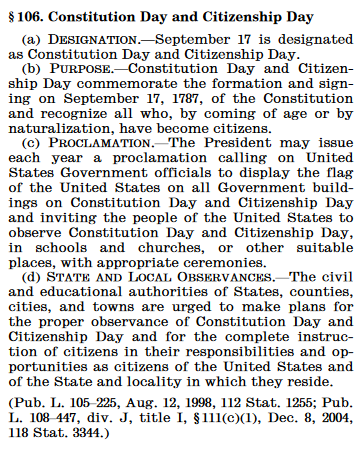 Librarian/Liaison to select departments in the College of Arts and Humanities; Liaison to the School of Communication and Journalism; Liaison pro tem to the Psychology Department; Accidental Government Documents Librarian; Library Department Chair

Originally petitioned for by the Daughters of the American Revolution, signed by President Eisenhower in 1956 and subsequently put into practice by President George W. Bush in 2002, the observance of Constitution Week is designed "to promote study and education about the constitution which was originally adopted by the American Congress of the Confederation on September 17, 1787."  --Wikipedia.

Did you know that when Constitution Day falls on a weekend day, it is typically commemorated on an adjacent week day, such as the following Monday?

Material for this LibGuide is used with the generous permission of Lucy Duhon, Scholarly Communications Librarian for the Carlson Library at the University of Toledo